The second round of trotting around the Island, while everybody else went to work on a Monday, was down to my own Jungle home – Uda Walawe. Stevie did have some trouble pronouncing the word but he should manage. Started off as two sleep deprived travellers with our faithful wheel man Mahesh. Apparently both of us had the same idea when I walked up to the car clutching on to my pillow. With two pillows in tow the journey was pretty much a blur apart from the ‘fresh out of the oven’ bread that we stuffed ourselves from the usual Kuruwita stop over. The rest of it we were both pretty much knocked out like hibernating bears, which was a good thing because Stevie had been drowning in kitchen woes over the weekend and I was caught up, restless, within the essence of a young artist amongst other things and we both needed the ever so elusive sleep, desperately. Mahesh had hammered right through and made excellent time and we reached in the park by 8.30.

Rambo was submerged in the water well as he could be after the recent dilemma (read about the Rambo Dilemma) and Stevie got a glimpse of his first pachyderm, which was well more like a rather large rock sticking out of the tank. The sun battered down rather harshly in no time and everything was drying up rather fast. We drove around rather desperately keeping both an eye out for a good sighting and Sumedha. A couple of hours passed and Stevie had seen plenty of buffaloes wallowing in the mud along with crocodile offspring and plenty of raptors. We both found ourselves rather envious of the ‘sit in the mud all day’ and do nothing buffalo lifestyle. I think Stevie appreciated the vast calmness of mother earth in the park as much as I did. It was so very easy to lose track of everything serene in the madness of the city.

I was beginning to wonder if Stevie was going to be one of those few unlucky souls that was going to run into a rare off day with hardly any sightings. The few we had seen were rather far away, Stevie seemed to appreciate them regardless. And then there was that familiar whiff of wind just before the rain and I knew the giants were going to turn up after all. After we watched a young grey heron who had just about caught a fish too big to fry Stevie had spotted a wild humanoid and Mahesh pack of ‘wild dogs’ and then we felt Manju switch gears, a lonely bull was trotting across the grassland. Stevie finally got an up close as the massive elephant crossed behind us. And turn up they did, or well we turned up at their slumber. It was back to back herds of elephants ;leaning up against trees or sprawling on the floor right under our noses. And the next few hours was spent pretty much watching the gentle giants.

We got out of the park rather hungry but there was a little river we had to visit at Kapila’s humble home. The rain greeted us on the drive over the bund and the climate had gone from arid – scorching to perfect cool. Kapilas river side was well worth it as it was a lovely little spot. We certainly needed a day here to just lie on the rocks and do nothing. Stevie was overjoyed when Kapila scaled up a king coconut tree to get him his ever so favourite liquid. And they were indeed some of the tastiest we had. Stevie had somehow missed having the inside ‘මදේ’ (madey – flesh) up till now and his reaction? Well the picture should speak for itself 😉

The king coconut starter gave us enough juice to finish the elephant transit home and a nice chat with Dr.Vijtha, who I myself hadn’t met till today. It was nice to know that there were still humble men out there who cared genuinely. We watched thirty odd little ones get up to their antics add feeding time which made us crave even more for a good rice and curry. UW behind us we headed off to Sankapala looking for Mahesh’s perfect rice and and curry spot. And it was perfect indeed. The whole lot of people in the vicinity were amazed by Stevie who was fingers deep in curry, delightfully whacking away at everything including the ‘kochchi'(extremely hot chilli variety). A slyly borrowed spoon, hidden stash of kithul and a curd pot so fresh you could smell the buffalo was the ultimate cherry on top.

I’m certain Stevie is my long lost ‘travel buddy’ soul after that one and next Monday needs to get here soon. We also discovered, quite aptly, that photographers taking pictures of each other makes us highly self conscious and taught the white boy that one does not simply bite down on ‘ගල් ඝියබලා’ (Gal Siyambala -a type of tamarind) shell and all. Blissful. 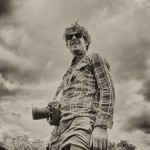